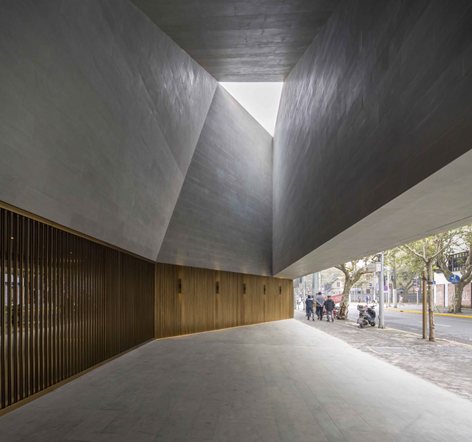 Occupying the site of a former theater dating from the 1930s, the existing building had undergone a series of renovations over the decades, during which much of the original character and architectural detail had been stripped away. The resulting building as we found it had become a pastiche of various styles and programmatic uses.

As such, the primary design challenge was to recall the clarity and unity of the historic building in all its grandeur, while creating an architecture that would not only be relevant today, but have the potential to become a lasting and significant landmark in modern Shanghai.

From the street, the building reads as a heavy stone volume hovering just above ground level, lodged firmly between its neighbors, it announces its presence unabashedly. Encased entirely in stone, the upper two floors relinquish any outwardly visible openings in favor of vertically carved apertures.